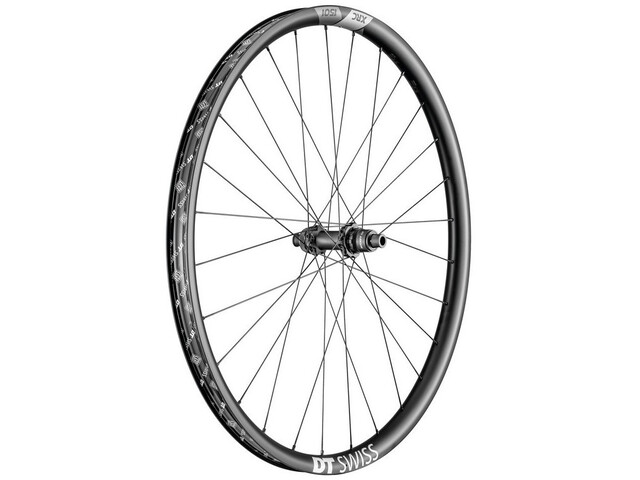 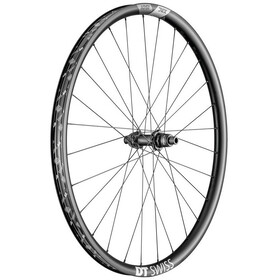 Tailored to the needs of performance orientated cross country riders, the XRC 1501 SPLINE ONE leaves nothing to be desired. The light 30 mm wide carbon rims offer ideal support for modern XC tires. Rolling on race proven and super durable 240 hubs with RATCHET EXP freehub system every bit of your energy is transferred into forward motion via equally racy double butted spokes and a perfect wheel build.

WHY USE CARBON?
Carbon makes it possible to build lighter wheels, which improve riding behaviour of the specific wheels for various fields of application. By further improving 1501 SPLINE ONE wheels, DT is able to reduce the weight by up to 180 g per wheel set compared to the previous generation while preserving its values.

WHY WIDE?
A wider rim provides improved tire support which allows lower pressure and leads to less rolling resistance on rough tracks. Learn more about it.

HIGHER TIRE SUPPORT
ALLOWING LOWER PRESSURE
During cornering, lateral forces occur which act on the tire. The tire’s contact patch moves in the opposite direction to the lateral force. When riding through a corner with a narrow rim, the tire’s contact patch is no longer above the flange of the narrow rim. The tire is no longer supported by the rim and folds, resulting in an unstable riding experience. This folding creates tension over the tire which pulls on the opposite bead and causes a loss of air between the tire bead and the rim bed, so called tire burping.
The tire contact patch of the wide rim is inside the rim flanges. The side wall of the tire is supported by the wide rim which increases control. A wider rim can therefore be ridden with lower air pressure than a narrower rim.

LOWER AIR PRESSURE
LESS ROLLING RESISTANCE
A wheel with low tire pressure will roll better over rough surfaces than a wheel with high pressure, as the tire can adapt better to the ground. A wheel with high air pressure cannot absorb obstacles and the bike must move upwards, comparable to lifting work, which increases rolling resistance. Less air pressure leads to less fatigue, because as a rider you also have less lifting work to do.

TUBELESS TECHNOLOGY
Tubeless tires offer some decisive advantages over the conventional combination of tire and tube: The tyre can be driven with less pressure without risking "snakebites" and therefore offers more grip. The lower pressure also ensures greater driving comfort. Dispensing with the inner tube means that there is no friction between the tube and the tyre and that therefore the rolling resistance is lower when driving off-road and over obstacles. If tubeless milk is also used, the tyre is also immune to punctures and small cuts. A great advantage for all those who like to ride long distances and away from the nearest bike shop.

The advantages
Tubeless Ready rims from DT Swiss have further advantages over conventional rims. Thanks to the design of their cross-section, the tyre simply pops into place when inflated, so that usually only a normal stand pump is needed. The ingenious tread pattern of DT Swiss rims also ensures that the tyre fits precisely and securely, even under tough driving conditions.

The perfect fit
The profiles of DT Swiss rims are specially designed for tubeless use. They guarantee a perfect fit and make the installation of the tyre as easy as possible. Nevertheless, it is always possible to use a conventional combination of tire and tube.

DT Swiss valve
The use of aluminium saves 40% weight compared to conventional brass valves. The integrated valve tool in the valve cap saves time and effort in finding the right tool for removing the valve insert. The conical valve base ensures a tight fit. The DT Swiss Tubeless valve fits perfectly to DT Swiss rims and ensures a perfect seal for long trouble-free rides.

DT Swiss tubeless band
The DT Swiss Tubeless Ready Tape seals the rim and also functions as rim tape. It is available in different sizes to fit perfectly to the different inner widths of the rims.

PRO LOCK TECHNOLOGY
Pro Lock is a process where a patented, dual compound, adhesive liquid is injected into the nipple thread, allowing for extremely durable wheel builds. By threading the nipple onto the spoke the adhesive is activated and starts to harden. Retruing the wheel is still possible after the adhesive has hardened completely, with only a minimal decrease of its thread-lock function.

PRO LOCK – FACTS
DT Pro Lock nipples prevent the spoke-nipple connection from loosening.
Wheel durability improves up to 20 times compared to non Pro Lock builds.
Suitable for either hand or machine built wheels. Use of grease or oil not recommended.
All DT Swiss nipples are available with and without DT Pro Lock.

ENGAGEMENT ANGLE TECHNOLOGIE
A hotly discussed topic in the market right now - engagement angle! What is the engagement angle, how does this angle affect riding performance and is the conventional wisdom "the more the better" really always better?

RIDING EFFECTS
Now that DT knows what the engagement angle is, the question is when and how does this angle affect riding?

BACKLASH
The backlash - is the maximum idle distance the crank can turn before the freewheel mechanism engages and converts the force on the crankinto acceleration of the wheel. The backlash is influenced by three factors, the crank length, the gear ratio and the engagement angle.

The crank length and the engagement angle are proportional to the idle distance of the crank. The gear ratio, on the other hand, has an inversely proportional effect on the backlash.
The smaller the gear ratio, the greater the maximum idle stroke of the crank.
So when is a small backlash important? When it comes to climbs and situations where it is important to accelerate immediately to overcome obstacles.

PEDAL KICKBACK
Pedal kickback is a phenomena that only appears on full suspension bikes. It is caused by chain tension during suspension compression, which leads to a backwards movement of the cranks. Additionally, this chain tension prevents the suspension to move freely. But what does pedal kickback have to do with engagement angle?

To describe the effect in more detail, DT first makes two assumptions. The rear wheel is fixed and can neither turn clockwise nor counterclockwise. The second assumption that is made is that DT are in a static situation, which means that they leave the speed of the bike out.

So what happens if the rear suspension compresses?
The rear shock of the bike compresses.
The rear wheel moves around pivot point.
The distance between the bottom bracket and the rear wheel axle changes. This would not happen if the pivot point of the rear swing arm was exactly on the bottom bracket.
This causes the chain length to change, which causes the crank to rotate backwards.

What's the influence of the suspension?
If the crank is prevented from turning, the chain tension keeps the distance between bottom bracket and rear axle constant which in turn avoids the swing arm to move freely and the suspension is not able to absorb the impact.

INSTANT ENGAGEMENT
Instant engagement would be achievable with a freewheel system that offers an infinite number of points of engagement (POE). In any situation where your freehub body might be, the freewheel body is engaged in the hub housing. The freehub body can rotate counterclockwise, but cannot move clockwise. When the suspension is compressed, the distance between bottom bracket and rear axle increases (in dependence of the respective bike kinematic). The change in chain length is thereby compensated by the derailleur or the chain tensioner. Since the freehub body can only move counterclockwise, the chain is tensioned backwards, what causes a backwards movement of the cranks too. If the cranks were fixed, a change in distance between bottom bracket and rear axle would not be possible, what would avoid free movement of the suspension.

NO ENGAGEMENT
The other extreme would be a freewheel system without any POE, which would mean that the freehubbody could rotate freely in both directions. With this starting position, the freewheel body can now also move in a clockwise direction. Even if the crank is now fixed by the rider's body weight, the rear end could work freely, since the chain can move clockwise over the cassette.

ADDITIONAL REMARKS
While riding, the hub rotates at a certain speed. To accelerate, the freewheel body has to engage with the hub and this only occurs if the cassette rotates faster than the hub. In case that the angular speed of the hub is faster than the angular speed of the cassette, the freewheel body cannot engage and the wheel would not accelerate.

For pedal kickback, this means that if the angular speed of the hub is higher than the speed of the freehub body generated by the chain tension, there would be no pedal kickback or negative influence on your suspension. But it is not easy to reach this critical speed, because the faster you ride, the higher the possibility of harder compressions and the faster the freewheel body speed reached by the chain. If it were easy to reach this speed, there would be no world cup riders that experiment with removing a sprocket to have an idle to eliminate pedal kickback.

However, it should also be noted that the kinematics of some bikes have no pedal kickback.

CONCLUSION
In the development of an optimal freewheel system DT believes that three factors have to be considered: reliability, weight and points of engagement. But you must bear in mind that there is a trade-off between all of these three dimensions. Plus l’angle d’engagement est petit, plus le système de roue libre doit être gros afin d’assurer le même niveau de fiabilité qu’avec un système ayant moins de points d’engagement. If DT were to introduce a system with more points of engagement DT would need to enlarge the construction of the hub what eventually would lead to a significantly higher weight.

However, rather than minimizing the engagement angle, the overall performance of the system must be maximized. DT still believes that a system with 36 points of engagement represents the best optimization within this three dimensional perspective in terms of reliability, weight and points of engagement.

LEGENDARY RELIABILTY
The patented freewheel system, which features high-precision star ratchets, guarantees top performance and reliability. The simultaneous engagement of the ratchet teeth makes the Ratchet System extremely reliable since the loads are distributed equally across a large contact surface.

NOTOOL CONCEPT
The plug-in construction of the Ratchet system hubs allows for quick and tool-free maintenance.

FREEHUB BODY CONVERSION
The no-tool concept allows the conversion to a different drivetrain standard within seconds.